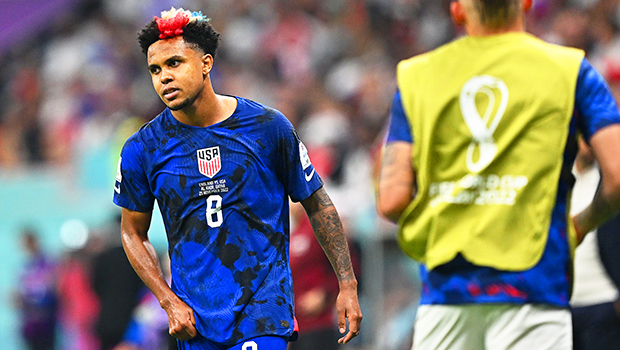 Weston McKennie turned heads when the United States men’s national team’s official Twitter account shared an image of him with a brand new and colorful ‘do. The 24-year-old midfielder dyed the bleached streak he had in his hair for quite some time ahead of the USA’s first 2022 World Cup game against Wales on Monday, Nov. 21 to red, white, and blue, showing his pride for his home country. Before that, he spoke at a press conference with his previous hairdo and said he was “ready” to play some serious ball. Of course, there is much more to Weston McKennie than his ever-changing hair. Read on to learn five things about the talented soccer pro.

Weston Grew Up With A Brother And A Competitive Edge

Weston is the younger brother of John McKennie Jr., who helped develop his competitive edge. “Given the fact that my brother was older than me, I always had to compete because I hated losing,” the pro soccer player told The 18, a soccer news site. “Obviously I lost more times than I won against him, but those times that I did win was just like, ‘Oh my gosh, this feeling’s amazing,’ so I’ve always wanted to win.”

Giving more insight into his competitive edge, his father, John McKennie Sr., recalled to the outlet that Weston would not give something up as a child until he nailed his goal or won. “He, for lack of a better term, would just get irritated that someone’s telling him that he couldn’t do something, and he would try to prove them wrong like, ‘Oh, I can definitely do this.’ He would just work at it over and over and over until he could perform the trick or the drill,” he said.

Weston Plays Professionally for Italy, But Got His Start In Germany

Although he’s from America, Weston has played for Italy’s elite Juventus Football Club since 2021. He also grew up playing soccer in Germany and landed on his first pro team in the European country.

Weston was born in Fort Lewis, Wash. to John McKennie Sr., a member of the U.S. Air Force whose job took him and his family all around the world to fulfill his duty, according to The 18. Weston and his family moved to Germany when he was 5 years old, which is where he was introduced to soccer by a school friend. His family quickly realized he had a natural talent for the sport. “I knew he was good and what he was capable of because when he was 6 years old in Germany he was playing up with 14-year-olds,” his mother, Tina McKennie, told the outlet.

Weston was instructed by a young but eager coach for the next three years before returning to America. Once back in America — this time in Texas — he trained relentlessly and moved from trainer to trainer to perfect his craft. By the time he was a senior in high school, he had an offer to go pro with FC Dallas and a full-ride scholarship to the University of Virginia. While he was originally set on heading to Virgina to further his education, Weston’s world changed when he received an offer from Germany’s pro club, FC Schalke 04. He immediately knew that was his next move.

Candace Cameron Bure’s Husband Val Bure: Everything To Know About Their Marriage & Family

“Schalke came into play and it was my dream. I always said it was if I played pro, I want to go back to Germany, and I wasn’t going to be super picky if I got an offer from anywhere in Europe, I would’ve gone, but I really wanted to go back to Germany because it was like a second home for me. I was familiar,” he explained to The 18. “The offer came on the table with Schalke, and as soon as that happened my mind was made up. I was like, ‘Yo, I’m going.’”

Weston’s soccer career hasn’t been totally flawless — in early 2022, he suffered a foot injury. The Washington native fractured his foot during the UEFA Champions League game agaiforSpain’s Villarreal Football Club in February. The injury was supposed to sideline him for two months and prevent him from qualifying from the 2022 World Cup, according to CBS Sports. Clearly, his foot injury did not hold him back.

Weston Has A Silly Side

Weston has made his sense of humor known on and off the field. For instance, in a Sept. 2022 press conference, he slid closer to his teammate, Tyler Adams. He knew he was being funny and had a mischievous look across his face. Despite his efforts, his funny business did not impress Tyler.

Then, during the USA men’s opener for the 2022 World Cup, he went viral after he wiped his sweaty hands on a cameraman’s jacket during the game. Although it doesn’t look as if Weston intended to be funny, he certainly got a laugh from viewers online.

Weston Says His Success Is His Family’s Success

The rising soccer star is quite close with his family and said he owes a great deal of his success to his supportive family. “They can see this just as much as an accomplishment for them as it is for me. They were there for me through thick and thin,” he explained to The 18. “They were there for me when I had, I wouldn’t say mental breakdowns, but yes, when I thought I couldn’t do it, when I thought I wasn’t good enough, when I thought I couldn’t make it or when people brought me down. They were always there in my corner to tell me that I can, and that I am good enough, and that I could do it and my dreams would come true.”

Television Frontman Tom Verlaine Dead at 73
R. Kelly Has Sexual Abuse Indictments in Illinois Dropped Due to Due to “Extensive Sentences” for Federal Crimes
Keanu Reeves Explains Why John Wick 5 Isn’t Guaranteed Yet
Chris Hemsworth And Elsa Pataky Aged Up For Disney+ Project, And I Hope I Look That Good In 45 Years
Kelly Clarkson Stalker Arrested Against After 12 Restraining Order Violations