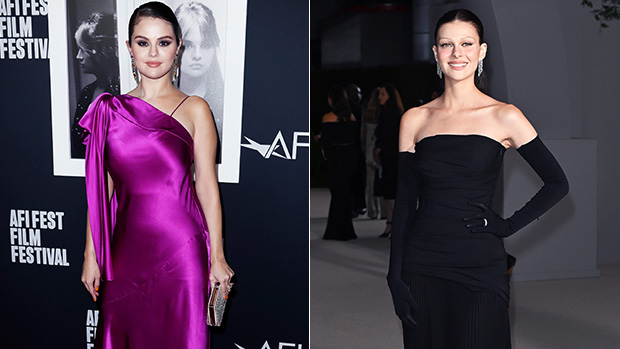 “I’m ready for a Nicola Peltz n Selena [Gomez] BFF era,” one fan wrote in the comments section of the TikTok Selena, 30, posted over the weekend. Nicola, 27, Selena, and Sel’s little sister, Gracie Elliot Teefey, all had a pajama party celebrating Selena’s new documentary, My Mind and Me. The three took a moment to lip-sync along to an audio, giving fans a reason to gush in the comments. “I wasn’t Nicola’s biggest fan, but her being Selena’s [BFF] is the greenest flag ever,” said one.

“I LOVE THIS FRIENDSHIP. I’M CRYING,” added another. “LOVING THIS FRIENDSHIP.” “NICOLA AND SELENA, the duo I didn’t know I needed.” “I have never seen her smile this much, lmao.” “Awww, your sister and your friend, and you are all so adorable.” Others praised Selena for opening up in the new documentary, while some wondered if the friendship bracelet’s on Selena’s wrists were Taylor Swift-level clues for Gomez’s upcoming album.

Nicola also shared a few shots of the sleepover to her Instagram. “girls’ night celebrating your beautiful documentary congratulations Selena!” she captioned a picture of the two of them curled up in matching pink pajamas. Nicola also shared a photo of the sleepover group that included Raquelle Stevens and Courtney Lopez (“best hosts ever!” Courtney wrote in the comments), and a pic of her husband, Brooklyn Beckham, getting busy in the kitchen with a cocktail shaker. “thanks b for the best food everrrrr,” added Peltz.

Selena’s documentary, filmed over six years, showed the “Hands To Myself” singer struggle with the pressures of fame amid her failing mental health. “If anybody saw what I saw, the state that she was in at the mental hospital, they wouldn’t have recognized her at all,” Raquelle Stevens said of the 2018 incident where Selena checked herself into a care facility. “I’m gonna be honest, I didn’t want to go to a mental health hospital,” Selena said in the documentary. “I didn’t want to — but I didn’t want to be trapped myself in my mind anymore.”

My Mind and Me also touched upon Selena’s relationship with Justin Bieber, albeit only twice. In one of the instances, Selena expressed frustration that she couldn’t be finally separated from her ex. “When am I going to be just good enough by myself?” she asks aloud in the documentary. “When am I going to be good just myself, not needing anyone to be associated with?”

The Weeknd – Is There Someone Else? (Official Music Video)
IT’s Andy Muschietti Shares Sweet Post On The 10th Anniversary Of His Directorial Debut
Accused Season 1 Episode 1 Review: Scott’s Story
The Hints James Gunn Has Dropped About His Superman Movie So Far
Anne Hathaway Recalls Being Asked A Creepy Question By A Journalist When Just 16 Years Old