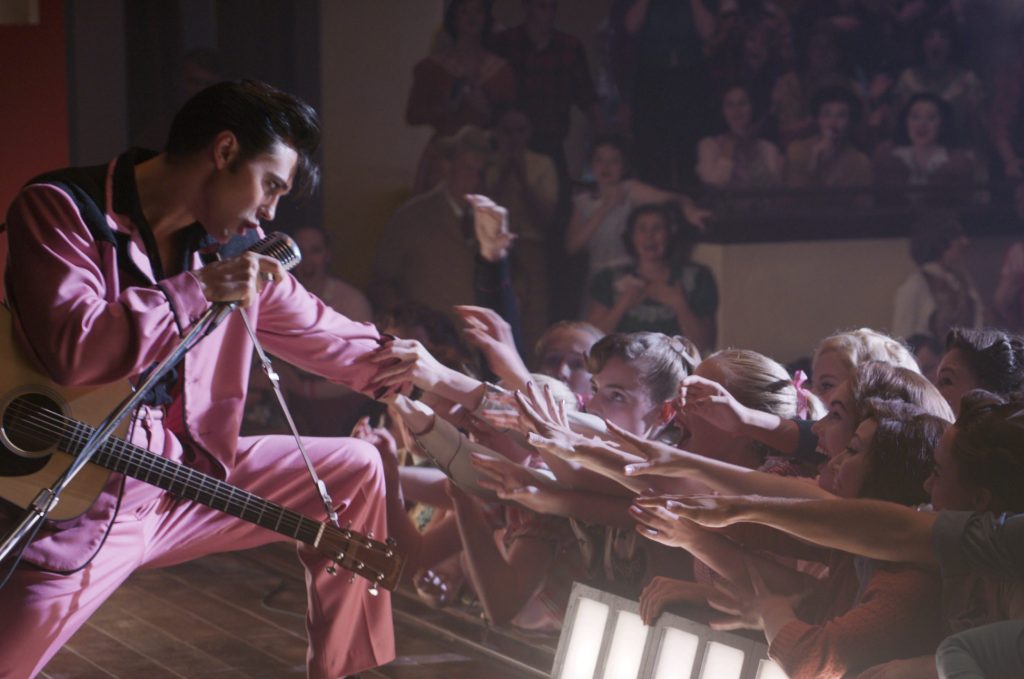 SATURDAY AM UPDATE: Refresh for more analysis and chart In an amazing feat for an adult-skewing, 2 hour and 39 minute running movie at the box office, Warner Bros’ Baz Luhrmann directed Elvis is heading toward an estimated $31.5M opening, looking to truly top the box office.

Outside of superhero tentpoles like Spider-Man: No Way Home at 2 hours and 28 minutes, lengthy movies have largely seen their openings capped during the pandemic, i.e. House of Gucci at 2 hours and 38 minutes did a 3-day of $14.4M while West Side Story at 2 hours, 36 minutes opened to $10.5M.

In addition, it’s an embarrassment of riches for most of the majors this weekend as at least four movies look to clear $20M+ apiece.

Elvis skewed heavily female at 58% with a massive 30% over 55 years old. Women and older adults have been the hard demos to pull out during the pandemic, and it’s clear in the wake of elder demo movies, such as Top Gun: Maverick cracking past the half billion point this weekend with $521.2M, everyone is feeling a lot of more comfortable about moviegoing. It’s always been said that it was the older demo tentpoles such as Top Gun 2 and No Time to Die that would pave the way for adults to come back, and to keep coming back, especially for a movie like Elvis.

Note, while some tracking services had Elvis at $30M, others took the under in projecting this stylized version of the King of Rock and Roll, believing that Top Gun: Maverick would lead the box office. That Tom Cruise movie isn’t far behind with a fifth weekend of $30M, -33%. Some believe that Paramount could have final bragging rights for No. 1.

Doubt loomed in regards to whether the truly older fanbase of the legendary singer would come out (Note if you’re 50, you’re still young for an Elvis Presley fan; he died when you were 5 years old); and that . There was a gap between the definite interest to see Elvis, and its unaided and total awareness.

In regards to the social media chatter ahead of opening, RelishMix noted, “Skeptics and worshipers of The King, feel that anyone who is a lover of Elvis usually tends to steer away from movies about him. Reason being, he is untouchable, no one can come close to representing him. But, that seeing clips make them want to see it, and hearing Priscilla Presley and Lisa Marie Presley’s reactions and approval have fans excited.”

RelishMix also observed that there were online “debates about the look of Austin Butler in the title role — most are sold on how his resemblance to Elvis; his hair, eyes, lips, gaze, voice and vibe draws viewers into their experiences and concerts they watched.”

Presales were hovering around where Paramount’s Rocketman were yesterday. That Elton John movie turned in a first day with previews of $9.1M for a $25.7M opening while Elvis posted a first day, including $3.5M in previews, of $12.7M.

While critics have waned to 79% certified fresh on Elvis, audience exits are great enough with an A- CinemaScore (higher than Luhrmann’s last big feature, 2013’s Great Gatsby which did a B) and a great 89% positive and 72% definite recommend in PostTrak exits. Elvis pulled in a crowd that was close to 80% over 25, 61% over 35 and close to half over 45. Both those over 50 (43%) and the 35+ crowd (60%) on CinemaScore gave Elvis a solid A. Diversity demos were 62% Caucasian, 20% Latino and Hispanic, 7% Black, and 11% Asian/other. Elvis triumphed in the South, where the movie notched five out of its ten runs. PLF Screens have driven 21% of the box office to date; those screens split among three other titles. Disney has all the Imax for Lightyear.

Also beating expectations this weekend is Universal/Blumhouse’s horror movie The Black Phone, with a $23.2M take after a $10.2M Friday (which included $3M previews) in 4th place. Uni also owns 3rd with the third weekend of Amblin’s Jurassic World Dominion, which is posting $26.1M, -56%. The Rotten Tomatoes score on Black Phone remains healthy at 83% certified fresh with a B+ CinemaScore (very good for horror movies, which tend to get Cs), and great exits of 88% positive and a 67% recommend on PostTrak. The pic’s top ten theaters came from the coasts and the Southwest. A handful of PLF screens repped 5% of business to date.

The ticket sales are besting any mixed pre-weekend chatter seen by RelishMix, which was comprised of Blumhouse super-fans, die-hard Ethan Hawke followers, and those who believed “the whole movie is in the trailer.” “There were mentions about the date changes and comparisons to It, plus encouraging call-outs to writer Joe Hill and busy director Scott Derrickson, who helmed Doctor Strange and Sinister parts 1 and 2,” reported RelishMix.

Disney’s second weekend of Lightyear stands between $17M-$19M, in 5th place. If it clears $20M, it will be the first time in six years that five movies have cleared that benchmark at the weekend B.O. The last time was July 22-24, 2016, and that’s when Star Trek Beyond led with a $59.2M opening, Secret Life of Pets second with a third weekend of $29.6M, Lights Out opening with $21.7M in third, Ice Age: Collision Course debuting with $21.3M and the second weekend of Ghostbusters with $21M. All in, this weekend is amounting to an estimated $138.2M, which is off 32% when compared to the corresponding weekend 25 in 2019 (which happened to be Father’s Day weekend) and -9% off when compared to the weekend after Father’s Day. But four or five titles over $20M each — exhibitors and studios will certainly take it.

Also cracking the top 10 is the Hindi title Jug Jugg Jeeyo, booked at 318 theaters in 104 markets. The romantic comedy directed by Raj Mehta, follows an estranged couple, Kuku and Naina, who come to India from Canada, looking to tell their family about their impending divorce after their huge wedding. However, a bigger shock awaits them. OK results we here in NY, Chicago, San Francisco, and Toronto, for what looks to be a $235K Friday, and $604K opening.