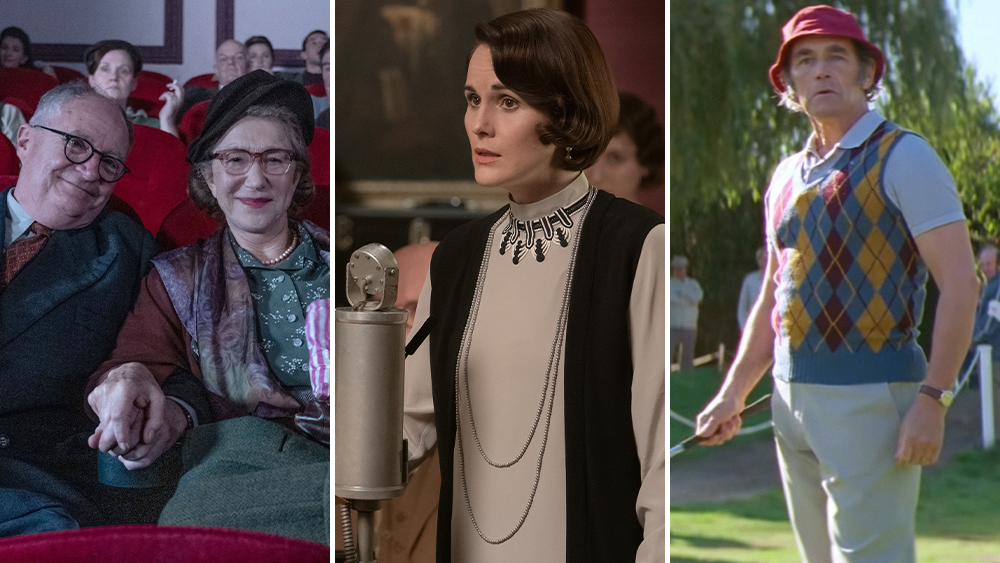 “I see nothing happening on a major scale to try to get the older audiences back to theaters,” griped Sony Pictures Classics’ co-president Tom Bernard.

Ideally, Bernard wants NATO to trumpet cinema safety in a big public campaign. (A NATO rep says not in the cards.) He’d like that campaign alongside a creative marketing push by independent movie chains, combined with a steadier flow of specialty films with wider appeal. That could include SPC’s upcoming The Duke, Jazz Fest: A New Orleans Story and The Phantom of the Open.

Focus Features’ bellwether Downton Abby: A New Era is the big test. If the Crawley family can’t rout lingering Covid jitters and force of habit to nudge older demos off home screens, then nothing can.

Hoping to prime the pump for this potential spring rebound, SPC and the Angelika Film Center this week unveiled “Bring A Friend Back To The Movies,” a new initiative that offers a free guest ticket at Angelika locations for anyone seeing The Duke its first week out. The film, from the late Roger Michell, stars Helen Mirren and Jim Broadbent. It opens in New York City on April 22.

Angelika CEO Ellen Cotter said the specialty story “is moving in the right direction. We’re just not out of the woods yet and have more work to do to get the audience back.” Attendance and box office sales have surged from 2021 (and from Covid-shuttered 2020), she said. But the tally is still 50% lower than in 2019.

“We are going to have to be more assertive and aggressive,” she said. On April 29, a week after The Duke collaboration kicks off, the Angelika will launch its first membership program with rewards, benefits, including free screenings, and discounts on tickets and concessions. She said the circuit may start special screenings for those still antsy about Covid where “seating will be limited, and we’d check vaccination cards.”

SPC is marketing “Bring A Friend Back” heavily across commercial radio drive time, cable, social media and local news. “The Marvel guys are back. But this is part of the system too,” Bernard said. ”People have got to be tired of watching countless mediocre movies on streaming services.”

There have been pockets of high-performing specialty films during Covid, but the offering week-to-week has generally been more trickle than flow for new titles and many a combination of very limited release, limited marketing, day-and-date, and quite a few foreign language, which is still challenging. As new product rolls out, echoing the ramped-up sked for big studio wide releases, distributors disagree on timing but see the sector perking up. The idea is to push into that wave.

RLJE Films presents sic-fi Dual, written and directed by Riley Stearns, on 150-plus screens. After receiving a terminal diagnosis, Sarah (Karen Gillan) opts for a cloning procedure to ease her loss on her friends and family. When she makes a sudden and miraculous recovery, her attempts to have her clone decommissioned fail and lead to a court-mandated duel to the death. She has one year to train her body and mind for the fight of her life. Starring Gillan, Beulah Koale with Theo James and Aaron Paul. Deadline review.

Oscilloscope presents Italian fable The Tale of King Crab in New York/Film at Lincoln Center. Adds Los Angeles next. World premiered at Cannes Film Festival’s Directors’ Fortnight, and was an official selection at the New York Film Festival. Luciano (Gabriele Silli) is a wandering outcast in a remote, late 19th-century Italian village. His life becomes undone by alcohol, forbidden love, and a bitter conflict with the prince of the region over the right of passage through an ancient gateway. When the quarrel escalates, Luciano is exiled to the distant Argentine province of Tierra del Fuego where, with the help of ruthless gold-diggers, he searches for a mythical treasure, paving his way toward redemption. However, in these barren lands, only greed and insanity can prevail. Written and directed by Alessio Rigo de Righi & Matteo Zoppis.

Utopia presents Jane Schoenbrun’s horror pic We’re All Going to the World’s Fair in NYC (Quad Cinema, Brooklyn Academy of Music) and Chicago’s Music Box, expanding to L.A. (Landmark Westwood ) and major national markets. The film centers on adolescent protagonist Casey (Anna Cobb) as she becomes transfixed with an online horror phenomenon called “the World’s Fair Challenge” where players chronicle the physical and psychological changes they undergo. As she slips down the rabbit hole of online obsession and role-playing, she develops a remote, disquieting friendship with a grown man also taking the challenge.

RLJE Films presents The Cellar, the SXSW Irish horror film by writer-director Brendan Muldowney, at five theaters and streaming on Shudder. Stars Elisha Cuthbert, Eoin Macken, Abby Fitz, Dylan Fitzmaurice-Brady. Pics tells the story of Keira Woods (Cuthbert), whose daughter mysteriously vanishes in the cellar of their new house in the country. Keira soon discovers there is an ancient and powerful entity controlling their home that she will have to face or risk losing her family’s souls forever. See Deadline’s SXSW Studio.