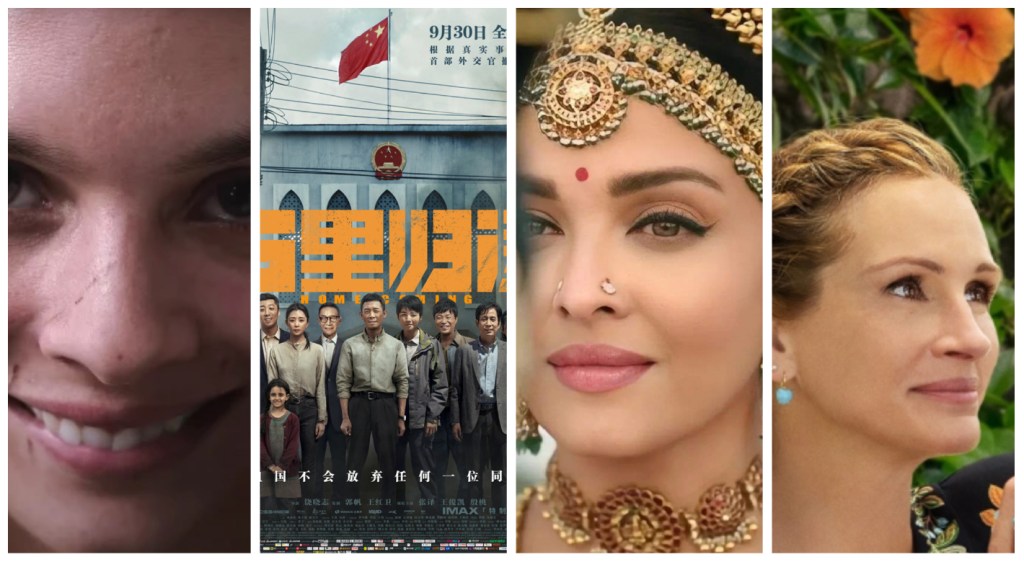 UPDATE, writethru: There was a varied offering at the international box office this weekend with newcomers from Hollywood and offshore markets, as well as notable holds, as we inch closer to full-on action later in October.

Big overseas entries included Mani Ratnam’s historical epic Ponniyin Selvan: Part 1 in a strong debut in India and abroad. Also new was China’s Home Coming, which, although it did about $60M in the home market, wasn’t a patch on last year’s National Day blockbuster The Battle at Lake Changjin (more on those below).

Landing the top offshore debut for the studios was Paramount’s Smile with $14.5M from 58 markets, and $36.5M globally. The horror audience grinned in all areas with good word of mouth for the Parker Finn-directed movie that was also tops domestically.

Reinforcing that audiences want to go back to the cinema for something fresh, on a like-for-like basis, the offshore start on Smile is 18% above Truth or Dare, 55% ahead of Hereditary and on par with The Black Phone. Smile, whose first footage intrigued exhibition at CineEurope earlier this year, was led by the UK with $2M from 520 locations at No. 2. France was also a No. 2 debut with $1.4M from 303 sites. In horror-leaning Mexico, the movie scored a No. 1 start of $1.1M from 855 locations. Rounding out the Top 5 were Germany ($1M from 316) and Australia ($800K from 206).

Still to come are Korea, South Africa and Vietnam next week.

Last frame’s champ, the rerelease of James Cameron’s Avatar, took the Na’vi to Spain where they had a No. 1 $1M opening while holdovers were down 45%. The sophomore session for the remastered version, which acts as a table-setter for sequel The Way of Water in December, was $12.3M in 51 markets. The reissue has now added $58.1M globally, of which $39.5M is from offshore. As a sign of things to come, 3D accounted for 81% of ticket sales in Asia, 76% in Europe and 70% in Latin America.

Now, let’s talk about Universal/Working Title’s Ticket to Paradise and the  ‘older’ female audiences who have been amongst the most difficult to return to cinemas. In the fitting words of Eddie Money, they  have “waited so long” for a new romcom to keep that momentum going (at least since The Lost City, but in general over the pandemic years).

This is one of the standouts of the past few weeks. Well before its domestic bow on October 21, the Julia Roberts/George Clooney romcom added $9.4M this session and has already amassed $45.3M in 59 offshore markets which lands it 16% ahead of The Lost City at the same point.

The Ol Parker-directed island romp is helping to bring back this underserved demo, who, yes, still want to go to the movies when the alchemy is there. The movie is headed for a $90M+ international cume (which, given exchange rates, would have looked a lot higher several months ago).  And, again, North America has not yet released.

In like-for-likes, Don’t Worry Darling is running 41% above A Simple Favor and 69% ahead of Where the Crawdads Sing.

Huzzahs for DC League of Super-Pets which has crossed $100M internationally. The Warner Bros title added $3.4M from 70 overseas markets this session to reach $101.6M.  The global cume to date is now $193.3M.

Non-studio movies overseas this session include India’s Tamil-language Ponniyin Selvan: I from Lyca Productions and featuring Aishwarya Rai. It debuted in the Top 10 in North America and did an estimated $28M globally. Billed as India’s Game of Thrones, it scored the biggest International IMAX opening ever for an Indian title, including the biggest IMAX local title opening ever in UK, Malaysia and Singapore, and 4th highest in India.

As I have previously noted many times, it is extremely difficult to get precise figures out of India given the reporting system varies, so we will keep an eye on this. We do know that it earned $2.1M from 121 IMAX screens, becoming the 3rd highest global IMAX opening weekend ever for an Indian title.

This leads us to China which had the biggest movie of the weekend with Rao Xiaozhi’s nationalistic Home Coming breaking far from the pack to lead all newcomers. At an estimated RMB 430M ($60M) through Sunday and a 9.6 on Maoyan, it was the clear frontrunner. Filmed for IMAX and starring veteran actor Zhang Yi and heartthrob Wang Junkai, originally of boy band TFBoys, the Huace Pictures title follows two unarmed Chinese diplomats who lead 125 Chinese citizens on an exodus to return to China from a fictional country in North Africa. It’s inspired by a real evacuation event in Libya in 2011, when the Chinese embassy evacuated more than 30,000 nationals over 12 days.

There are echoes of Wolf Warrior 2, China’s second biggest local movie ever at $850M+, as well as Operation Red Sea, however Rao recently noted that the diplomats in Home Coming “are also ordinary people; they are fathers, husbands, and sons, but they need to get to the frontline as their professional ethics and responsibilities demand,” he said according to local media. The Wandering Earth director Frant Gwo served as executive producer.

Other China newcomers including Steel Will, Ordinary Hero and New Happy Dad and Son 5: My Alien Friend had severely lackluster openings. To confuse matters, tomorrow will see the release of rescue thriller Come Back Home which revolves around attempts to rescue a young boy after he is lost during a family trip into the Changbai Mountains in northeastern China’s Jilin province. Donnie Yen stars in the pic that began production before Covid.

But let’s be honest, these movies don’t tend to travel. The market recently kiboshed the release of Born to Fly, which might have been its local attempt at Top Gun, and was expected to lead this weekend. It is good to see the market springing back from a fallow period, but the National Day holiday numbers are still lagging.