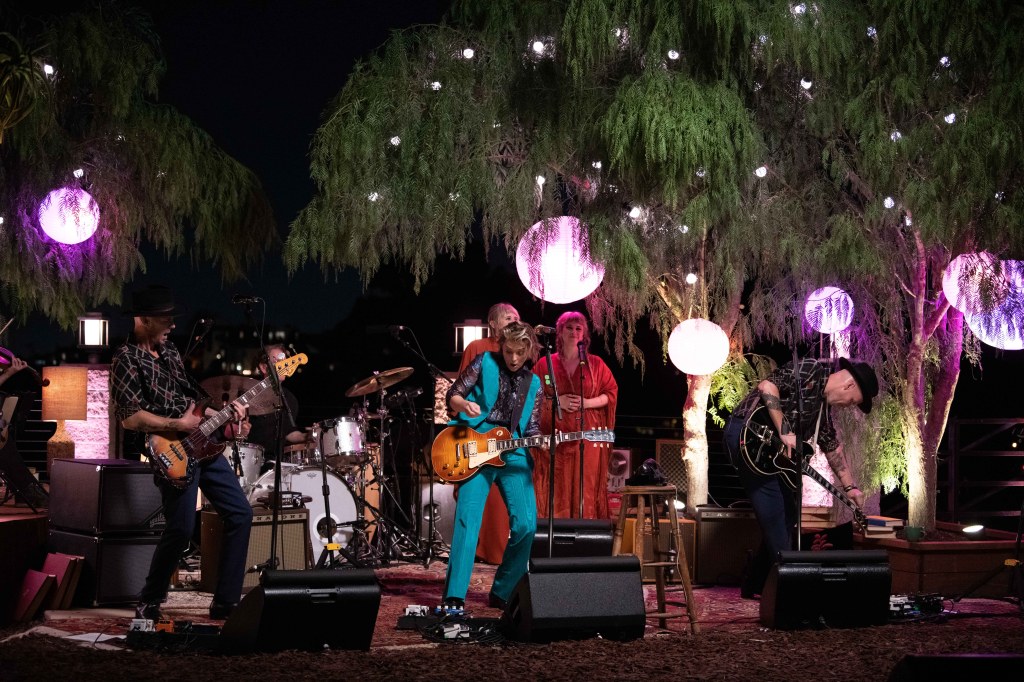 Imax is out this Sunday with Brandi Carlile: In The Canyon Haze – Live from Laurel Canyon on 31 screens nationwide, an encore of a live event that reps a milestone for the large format exhibitor.

The concert was broadcast Thursday from LA’s storied Laurel Canyon neighborhood to 87 Imax theaters (there would have been a few more if Hurricane Ian hadn’t taken out Florida locations). More than three dozen sold out for what is the company’s top-grossing live event. It featured Carlile and her band — no live audience — performing reimagined versions of songs from her new deluxe album “In The Canyon Haze”. Filmed for Imax using Imax digital cameras, it’s the first event of its kind Imax has staged.

Early this year, the company grossed $300k from its live stream of Kanye West’s Donda 2 concert event in Miami — the closest thing to date. (It released the film Jesus Is King: A Kanye West Film just ahead of the album in 2019.)

Imax took in a strong $500K domestic simulcasting The Beatles: Get Back–The Rooftop Concert (the group’s iconic 1969 gig on a London rooftop) in 60 theaters including a live Q&A with Peter Jackson, director/producer of the Disney+ documentary series The Beatles: Get Back. With a two-day weekend encore a few weeks later, the event did over $2 million globally.

Halsey’s pre-filmed If I Can’t Have Love, I Want Power, a visualization tied to her fourth studio album, made $700k last summer. Imax has done a live listening party, a short film and some other events but Laurel Canyon “is a big moment,” says Megan Colligan, Imax EVP and president of Imax Entertainment. The company currently has 127 out of 407 domestic screens wired for live events. It’s focused on an international rollout now (from about 50), aiming for 250 wired locations globally by year end out of 1,700 total.

For music, “The audiences that are coming in are audiences that do not regularly attend movies. That is a good thing,” Colligan says. “When you come to a positive experience in a space, you are open to it. You think you’re not a movie person, but you are in a theater. It’s a habit that can be formed.”

Music docs are definitely having a moment, with Moonage Daydream setting records, and special presentations of Anvil! The Story Of Anvil drawing fans to theaters.

And this weekend, Oscilloscope Laboratories presents Sundance doc Sirens at the Angelika in NYC. It will expand throughout the fall, the distributor says, aggressively pursuing an awards campaign. The film follows the music and young members of female Beirut thrash metal band Slave To Sirens coming up amid the Lebanese revolution. Directed by Rita Baghdadi, who shot and produced the film with Camila Hall, it’s the first feature from Natasha Lyonne and Maya Rudolph’s Animal Pictures.

Other specialty openings: The widest is The Good House from Roadside Attractions and Lionsgate on just over 1,000 screens starring Sigourney Weaver and Kevin Kline. Deadline review here. Roadside acquired it in Toronto last year and, says co-president Howard Cohen, held onto it “because we were hoping and waiting for the older audience to come back. So we are hoping that they are finally ready now.” Weaver is Hildy Good, a wry New England realtor and descendant of Salem witches, who loves her wine and her secrets. Her compartmentalized life unravels as she rekindles a romance with her old high-school flame (Kline). Directed by Maya Forbes and Wally Wolodarsky, who wrote the screenplay with Thomas Bezucha. Based on the 2013 novel by Ann Leary.

A24 presents drama God’s Creatures on 31 screens day-and-date. In a windswept fishing village, a mother is torn between protecting her beloved son and her own sense of right and wrong. A lie she tells for him rips apart their family and close-knit community in this tense, sweepingly emotional epic that premiered in Cannes, Deadline review here. Directed by Saela Davis and Anna Rose Holmer and written by Shane Crowley, based on a story he wrote with producer Fodhla Cronin O’Reilly. Stars Emily Watson, Paul Mescal, Aisling Franciosi, Declan Conlon, Toni O’Rourke, Marion O’Dwyer, Brendan McCormack, and Lalor Roddy.

IFC Films presents thriller Vesper day and date in 44 theaters across 30+ markets. Directed by Kristina Buozyte and Bruno Samper, written by Samper, Brian Clark and Buozyte. Starring Raffiella Chapman, Eddie Marsan, Rosy McEwen and Richard Brake. The story, set after the collapse of the Earth’s ecosystem, follows the titular headstrong 13-year-old girl (Chapman), who uses survival skills to subsist in the remnants of a strange and dangerous world with her ailing father (Brake). It’s the third feature by Buozyte and Samper, the last being Vanishing Waves back in 2012. “We have been fans of the filmmakers. What they have been able to do, what they created is absolutely beautiful,” says Arianna Bocco, president of IFC films. IFC had been tracking the project and acquired it in June. It’s a environmental thriller “but not pedantic. A coming-of- age story that, at the same time, explores what does our world looks like now,” Bocco says.

Future, Missy Elliott, the Roots, Glorilla, and More to Perform During 50th Anniversary of Hip-Hop Celebration at 2023 Grammys
Jay-Z, DJ Khaled, and More to Perform “God Did” at the 2023 Grammys
How Does Tom Cruise Feel About Those Viral Deepfakes Of Him Getting Up To Shenanigans?
Ranking Steven Soderbergh’s Top 10 Movies, Including Magic Mike
Ice Spice – in ha mood (Official Video)