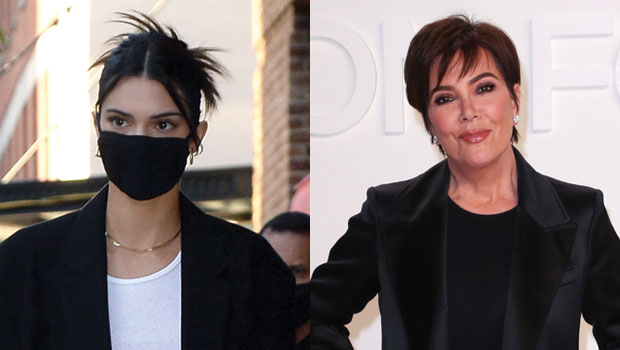 Kendall Jenner then tricked her sisters into believing she was engaged, all while playing ‘Truth or Dare’ with Kourtney Kardashian during her ‘Poosh Your Wellness’ festival!

Kendall Jenner, 25, pulled a couple fast ones over her family members during a tequila-filled game with sister Kourtney Kardashian, 42 — including mom Kris Jenner, 65! While playing “Truth or Dare” with Kourtney, the model choose the dangerous dare option more than once, forcing her to call Kris to tell her she was pregnant. “So I have a scenario,” Kendall explained to Kris via phone in the video, posted to YouTube on Saturday, May 1. “I have not gotten my period in a little while, and I was supposed to get it last week, so I kind of got nervous and randomly took a test,” she went on.

Kourtney, wearing a white crop top and white leather pants with cutouts by Beau Sauci, sat next to her on the sofa, barely able to contain her laughter as Kendall expertly fooled Kris. “And it came back positive, so I took another test and that one also came back possible, and I’m literally, like, about to cry,” Kendall falsely confessed. The sisters filmed the game as part of Kourt’s “Poosh Your Wellness” virtual festival on the same day, enjoying Kendall’s soon-to-launch 818 tequila (named for the area code of Calabasas, their hometown outside of Los Angeles). Kris — who is a grandmother of 10 — didn’t seem to freak over the potentially exciting news, which likely would be with Kendall’s boyfriend Devin Booker, 24.

As Kourtney cackled in the background, Kendall finally confessed she as “just joking.” Kourtney added, “She’s just kidding mom, relax,” as they explained they were filming a game. “Oh brother, I’ll go put the champagne back on ice,” Kris retorted. Next up, Kendall had to “text our family group chat that you’re engaged.” The brunette borrowed an engagement ring from a crew member before sending the photo to her family, including sisters Kylie, Khloe, and Kim.

Kylie called immediately, but wasn’t convinced by her sister’s faux-smile. “You’re lying,” the Kylie Cosmetics founder quipped. “First of all, [the ring] doesn’t fit you,” she hilariously said. Kim also wasn’t convinced, saying, “you’re lying! You’re at home!” A confused Khloe then called, asking, “wait, what?” as Kendall explained it was a, “dare.” The Good American founder dubbed the whole thing “so stupid.” Kourt added, “well at least we know you guys will be excited when the day comes.”

Michael Lohan Must Stay Away from Rehab Biz Following Arrest
Harriet Brindle on ‘Small Wonder’ ‘Memba Her?!
Colin Trevorrow Shared Some Of Michael Giacchino’s Jurassic World: Dominion Score, And It’s Terrifying
Trey Songz Sued for Allegedly Punching Bartender at Concert
Childish Gambino Sued for Allegedly Stealing ‘This is America’ from ‘Made in America’