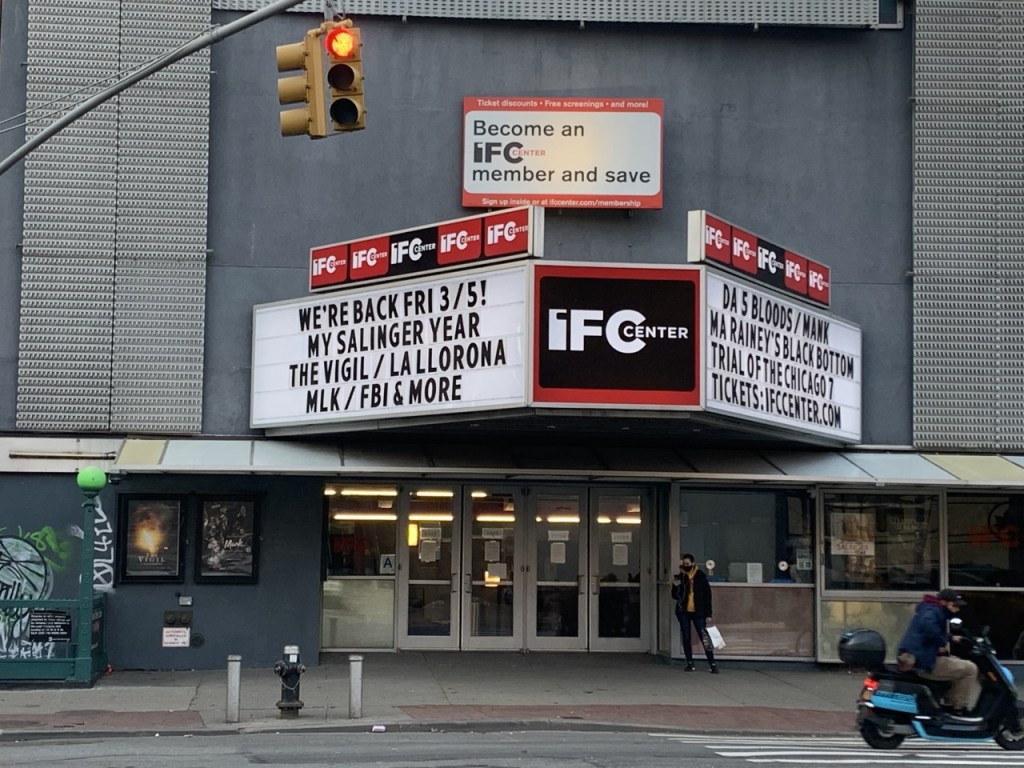 Popcorn and all other concessions will not be sold at the IFC Center, at least for now. But films, actual films, will be projected on all five of its screens beginning Friday for the first time in nearly a year.

“The room will be black — you won’t be on your phone!” Kajillionaire director Miranda July marveled in a video testimonial. That’s a dramatic change from the home viewing environment during Covid-19.

The IFC, a Greenwich Village mainstay that took over the abandoned Waverly Theater site in 2005, is among a select number of New York art houses reopening today. The economics are daunting. With state coronavirus restrictions capping attendance at 25% capacity, theaters can expect no more than a few dozen ticket buyers per show in the early going. Even at such modest scale, the market will be watched closely by the film business, which got a lift last weekend with Tom & Jerry grossing $14.1 million despite also streaming on HBO Max.

After polling its members, IFC decided to reassure patrons (based on their feedback) by requiring masks of everyone on the premises at all times and pausing food and drinks. Even without that crucial revenue stream, IFC GM John Vanco felt it was crucial to reconnect with audiences after a year of isolation.

“People have asked me if I thought about waiting to open,” he told Deadline in an interview. “And I said ‘No. Partially open is only bad compared to fully open.’ It was kind of a no-brainer in terms of us wanting to do this.” Since a stretch last summer when it seemed like steep declines in coronavirus infection would enable city theaters to get the state’s OK to reopen, Vanco said his staff has been coordinating preparations. The theater joined the CinemaSafe program, an initiative led by the National Association of Theater Owners, and follows its safety protocols, from ventilation to cleaning.

Several well-established New York locations have decided to wait, hoping that coronavirus restrictions will ease further and allow at least 50% attendance. The Film Forum has set April 2 for its reopening. Others, like the Metrograph on the Lower East Side and uptown’s Film at Lincoln Center, which operates the Elinor Bunin Munroe Film Center and its own repertory house, have not committed to a date.

Joining the IFC in reopening are the Angelika Film Center and its corporate siblings, the Village East and the Cinema 1, 2, 3 in Turtle Bay. Landmark’s The Quad, a short walk from the IFC Center, is also back in business, playing My Zoe, Night of the Kings, The World to Come and Supernova and offering a limited food and drink menu.

Lower Manhattan’s movie scene, for decades a cinema stronghold, looks a lot different than a typical weekend six weeks before the Academy Awards. Regal Cinemas, unlike mainstream rival AMC, has decided not to reopen for now. That erases competition from the circuit’s Union Square megaplex, a prime spot for platform releases (cast your mind back, through the mists of time, to films like Uncut Gems).

Don’t expect to hear too many box office numbers from specialty distributors. Many companies — including Disney-owned Searchlight, which has one of the year’s notable specialty titles in Nomadland — is not planning to report New York grosses. (The Angelika, Village East and Cinema 1, 2, 3, are playing Nomadland and A24’s Minari.) The usual goal of reporting per-theater grosses, even if the total is not massive, is to whet appetites for bookers in the following weeks. With the 25% cap and many rooms holding maybe 100 seats, some per-theater numbers could wind up in the hundreds, not the thousands. Still, it’s a starting point.

New York City Cinemas Reopen Today After A Year; What To Expect As Tickets On Sale From ‘Raya To ‘Tenet’

“Like any other market around the country that’s reopened, business will start slow and build,” Landmark Theatres COO Paul Serwitz said. “In such a unique market as New York City, people have arguably been cooped up at a higher level than most other cities. With the ease of getting around town, there will be a slow build to a reasonable level of business.”

In addition to limits on ticket sales, theaters have also had to shoulder hefty costs to equip theaters for a Covid operating environment. “Things like HVAC systems or PPE – those are essentially sunk costs and that’s a huge obstacle to a specialty operation like ours,” one exhibitor said. “To do that and then open with such limited capacity, it’s just not doable.”

Even before the pandemic, rising rents and a shift of talent and films toward streaming services pressured theaters. In 2018 and 2019, New York lost the Lincoln Plaza and Landmark’s Sunshine, two significant specialty haunts. Landmark last summer also closed its 57th Street location on the Far West Side. CineMex Holdings USA filed for bankruptcy last year, eventually reopening some locations but leaving its newly renovated CMX CineBistro on the Upper East Side dark. Alamo Drafthouse, whose downtown Brooklyn site has thrived since 2016, filed for Chapter 11 this week, unnerving arthouse habitués and distributors.

Compared with the feat of getting open again, release windows — a controversial topic of late in the C-suite and on Wall Street — is not quite as vexing to some art houses. Vanco notes that IFC has never had a problem with booking films available at the same time they hit VOD or streaming. Its sister company, IFC Films, was an early pioneer of day-and-date releases.

A four-week series at the IFC Center, waggishly titled “What’d We Miss?” will give screen time to two dozen works whose big-screen glory was cut short by the pandemic. That’s an enticing idea for those who had to catch Bacurau, Sound of Metal or Ammonite at home. Vanco’s bet is that ticket buyers will turn up regardless of windows. It wouldn’t be the first time the location drew customers looking for an immersive experience. The Waverly, IFC’s predecessor, is where The Rocky Horror Picture Show first screened. “I don’t want these to have a pandemic asterix next to their names indicating that they didn’t play in New York and weren’t a part of New York film culture,” Vanco explained.

Netflix will also have a significant presence on the IFC marquee, with the New York theatrical premieres of Da 5 Bloods, Mank, Ma Rainey’s Black Bottom and The Trial of the Chicago 7. The streaming giant in late 2019 signed a lease agreement to operate the Paris Theater on 58th Street. The 71-year-old, single-screen palace next door to the Plaza Hotel will reopen March 19, playing a mix of the company’s awards titles.

The Motion Picture Academy is allowing films to qualify for Oscars this year even without theatrical runs. That fact, plus a shutdown of travel, theaters and festivals, has made for an unprecedented awards season, but the re-emergence of New York arthouses brings a dash of the familiar. IFC’s annual booking of Oscar-nominated short films will open April 2. Along with new films like My Salinger Year and The Vigil, this week’s bill includes, in addition to Netflix titles, La Llorona, a shortlisted contender for best foreign-language film, and documentary MLK/FBI, another shortlisted film.

As the weather warms up, a number of specialty films will screen outdoors, a newly relevant, if not aesthetically ideal, setting. Film at Lincoln Center is among the participants in Restart Stages, an initiative starting next month that aims to reconnect arts organizations with audiences, with safety measures in place. State guidelines will let up to 400 people into Damrosch Park, a corner of Lincoln Center’s campus familiar to past attendees of Fashion Week, the TV upfronts or the Mostly Mozart music festival.

The Queens Drive-In also opens its spring season today with a screening of Coming 2 America. Programmers from the Museum of the Moving Image and Rooftop Films have put together a selection of repertory titles but also plan to mix in newer fare. Then comes the Tribeca Film Festival, which this year is slated for June.

Landmark’s Serwitz stresses that the action in New York and elsewhere should not be viewed as a return to normal. “Everything is going to change about specialty film and distribution and how it operates around the country,” he said.

Anthony D’Alessandro contributed to this report.