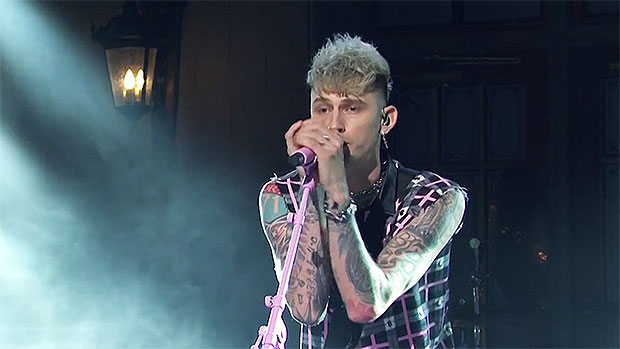 Machine Gun Kelly has made his ‘SNL’ debut! The singer performed his emotional track ‘Lonely’ and also rocked out with ‘My Ex’s Best Friend.’

Machine Gun Kelly, 30, was right at home on Saturday Night Live. The Texas native — née Colson Baker — made his debut on the long running NBC sketch series on Saturday, Jan, 30. He opened his first of two incredible performances with “My Ex’s Best Friend” feat. blackbear. Fans on Twitter quickly dubbed the SNL moment “a whole vibe,” and loved his live version. The star sported his signature pink for the playful performance, showing off a black and yellow manicure. Playing his guitar at the same time, MGK brought tons of energy to the upbeat performance as he showed off his vocals.

For his second performance, MGK performed song “Lonely” — one of his most emotional tacks off Tickets to My Downfall. Seated with his custom pink, black, and white guitar, the singer-songwriter gave his all into the performance as he rocked out with his band. I got in trouble/The first time my dad saw me/Dance with the devil,” he opened the track, which details his relationships with his late aunt and dad. His father passed away this past summer, and MGK has previously talked about how he lived with his aunt after his mom left him at just 9-years-old. “Lonely, lonely, even when the room is full/I’d trade it, trade it, I would trade it all for you,” he sings to them.

MGK appeared in a hilarious promo alongside host John Krasinski, 41, earlier this week. The “Bloody Valentine” singer appeared to get some advice from The Office alum as well as long time cast member Heidi Gardner. Heidi put John on the spot as she said it was a “big week, huge week” at Studio 8H as John prepared to also make his SNL debut. “But no pressure though,” he laughed back, as Heidi retorted, “No, I’d say there’s tons of pressure. I mean, it’s the first show back, the first show of 2021 the first show since [Donald] Trump!” MGK then hilariously added, “She’s right, you better be funny.”

In another clip shared to Twitter to promote the episode, Heidi questioned Machine Gun Kelly about how, exactly, he decided on his stage name. “Hey I was wondering…how did you come up with the name Machine Gun Kelly?” she pondered. “Oh, my mother’s maiden name is Machine Gun,” MGK joked back. The name is actually a reference to prohibition era George Kelly Barnes (1895 – 1954), who earned his nickname from his favorite weapon. “I remember when I was a kid watching @nbcsnl every weekend with my aunt and my dad, since they aren’t here to see this moment, I’m going to perform the song I wrote for them on the show,” MGK tweeted ahead of the episode. “Hopefully, I’ll feel them there,” he also wrote.

Recently, fans thought the 30-year-old singer and his girlfriend of several months, Megan Fox, were engaged. The 34-year-old actress was spotted with a massive diamond ring on her left hand as she exited a car outside of NBC’s studios (where MGK would have been rehearsing for SNL), but she seemingly shut down the rumors with another cheeky post. The Transformers alum replaced the diamond with a signet ring reading “F— You” on Jan. 29. Notably, Megan just officially filed for divorce from her husband of over 10 years Brian Austin Green over Thanksgiving and it has yet to be finalized.

While the couple may not be engaged yet, sources previously spilled that the duo are more in love than ever. “MGK’s friends have never seen him like this before, he’s so in love with Megan and pretty much spends all his time with her,” a source EXCLUSIVELY told HollywoodLife. “He says he wants to marry her and he wants her to have his baby, he talks about that very openly. Being with her has definitely tamed him, he’s laser focused on her and doing whatever he can to make her happy. It’s very sweet to see him so in love,” they added.