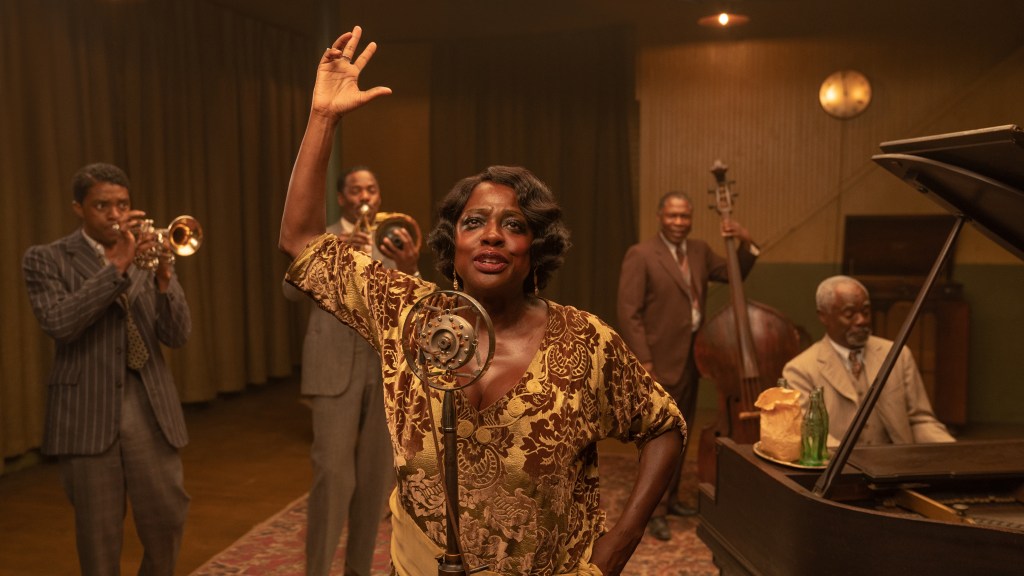 Leading the charge this week in streaming and specialty titles is Netflix with two films that have been garnering awards season buzz with their star wattage and prestige storytelling.

First up, is the highly anticipated Ma Rainey’s Black Bottom adapted from two-time Pulitzer Prize winner August Wilson’s play of the same name. Set in 1920s Chicago the film spotlights the titular legendary “Mother of the Blues” Ma Rainey (Viola Davis) and a band of musicians as they have a recording session amidst rising temperatures and tensions.

When the outspoken and fearless Ma arrives late, she has words with her white manager and producer over control of her music. As the band waits in the studio’s claustrophobic rehearsal room, ambitious cornet player Levee (Chadwick Boseman) stirs the pot with his fellow musicians which results in revealing truths that changes the course in all their lives. On top of that, he has his eye on Ma’s girlfriend (Taylour Paige).

“If Ma Rainey’s Black Bottom indeed is the final film of the late Chadwick Boseman‘s career, he is going out the way he came in: as an actor of unquestionable talent and power,” said Deadline’s Pete Hammond in his review. “And to see him teamed with Viola Davis in this film version of the first of August Wilson’s 10-play ‘Century Cycle’ is to watch two greats at the top of their game.”

The post-apocalytic drama The Midnight Sky opened in select theaters on December 11 and will expand its reach when it makes debut on Netflix on December 23.

Directed by and starring George Clooney, The Midnight Sky is based on the book Good Morning, Midnight by Lily Brooks-Dalton which was adapted by Mark L. Smith. The film follows Augustine (George Clooney), a lonely scientist in the Arctic, as he races to stop Sully (Felicity Jones) and her fellow astronauts from returning home to a mysterious global catastrophe. The stacked cast also includes David Oyelowo, Kyle Chandler, Demián Bichir  Tiffany Boone and newcomer Caoilinn Springall.

In an interview with Deadline’s Pete Hammond, Clooney addressed how thie film eeriely reflects the current pandemic as most of us remain in quarantine and weather this coronavirus storm.

“We finished shooting mid-February and then immediately were sent into isolation and bit by bit it became really clear that what we were talking about now was how you and I talk instead of meeting at an event, or how you talk to your family now or not being able to go home for Thanksgiving,” Clooney told Hammond. “It becomes about this isolation and this inability to communicate in the way that we want, and an inability to touch and be close to one another and that feeling of loss and coming to terms with it.”

Clooney added, “As we went through the film, as I was in the postproduction part, I certainly leaned more into that storyline as we went because I got into editing to make sure that we were able to discuss these kind of things in cinema. It’s certainly, unfortunately, timely. That wasn’t in any way something we could have foreseen.”

In the Deon Taylor-directed psychological thriller Fatale written by David Loughery, Michael Ealy stars as Derrick, a successful sports agent, watches his perfect life slowly disappear after a wild one-night stand. As a result, the sexy woman he risked everything for, is a determined police detective (Hilary Swank) who entangles him in her latest investigation. As he tries desperately to put the pieces together, he falls deeper into a cat and mouse game as he risks his family, career, and even his life. The Lionsgate film was originally set for a July release, but the pandemic caused it to shift to October 30 before finally landing on a theatrical and PVOD release date of December 18.

In STXfilms’ disaster thriller Greenland, Gerard Butler plays another hero in peril named John Garrity  who, along with his estranged wife Allison (Morena Baccarin), and young son try to find sanctuary while a planet-killing comet races towards Earth. As they learn of cities around the world being annihilated by the comet, the family experience the best and worst in humanity. With the countdown to global apocalypse inching closer, their incredible trek culminates in a desperate and last-minute flight to a possible safe haven.

Hammond said of Greenland in his review: “The usual beats of any disaster flick can be found here, but the execution and emphasis is quite different as Greenland establishes a strong emotional core enveloped in the importance of family ties.”

IFC Midnight brings thrilling suspense to theaters and digital this weekend with Hunter Hunter from writer-director Shawn Linden. The title itself invites horror.

Set in the remote wilderness (already a bad sign), Joseph (Devon Sawa), his wife Anne (Camille Sullivan), and their daughter Renée (Summer H. Howell) struggle to make ends meet as fur trappers. They think their traps are being hunted by the return of a rogue wolf. Determined to catch the predator in the act, Joseph leaves his family behind to track the wolf — again, not a good idea.

The longer Joseph is away, the more Anne and Renée grow anxious and they struggle to survive without him. When they hear a strange noise outside their cabin, Anne hopes it is Joseph but instead finds a man named Lou (Nick Stahl), who has been severely injured and left for dead. The longer Lou stays and Joseph is away, the more paranoid Anne becomes, and the idea of a mysterious predator in the woods slowly becomes a threat much closer to home.

Narrated by Oscar winner and the unstoppable force that is Meryl Streep, the docu Museum Town chronicles the creation of MASS MoCA (Massachusetts Museum of Contemporary Art) in North Adams, Massachusetts. The museum has become one of the largest spaces for the arts in the country.

Directed by Jennifer Trainer, a former journalist and one of MASS MoCA’s original builders, Museum Town explores the concept of art and culture as a means for economic revitalization and development. The docu takes a look at the artistic process itself — not only how museums work but how artists create, putting the spotlight on artists such as Nick Cave, James Turrell, Laurie Anderson and David Byrne. Kino Lorber releases Museum Town in virtual cinemas across the country through the Kino Marquee virtual cinema platform starting today.

Speaking of Oscar-winning actresses narrating documentaries, Olivia Colman tells the story of Nasrin Sotoudeh in the documentary Nasrin. As one of the world’s most courageous human rights activists and political prisoners Sotoudeh is a leading figure in Iran’s remarkably resilient women’s rights movement. Virgil Films and Kino Marquee release the film nationwide in virtual cinemas.