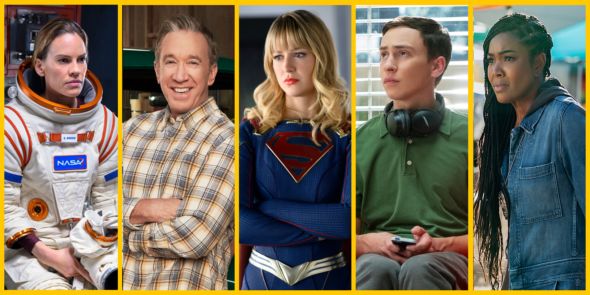 This list will be updated as the season progresses so feel free to bookmark and check back. If I’ve missed something, please let me know. Some final seasons may be delayed due to the pandemic. If most of the season’s episodes air after August 2021, the show will be moved to the 2021-22 list.

After Life (Netflix)
From Ricky Gervais, this dark comedy series about a grieving widower comes to a close with season three.

Americanah (HBO Max)
The streaming service ordered this series but then, due to the pandemic delays and star Lupita Nyong’o having to drop out of the project, the order was cancelled.

Atypical (Netflix)
A coming-of-age comedy-drama about an autistic teen and his family, this series concludes with its fourth season.

Away (Netflix)
An astronaut drama series that was set in the near future, this show didn’t have much of a future. It was cancelled after a season.

Bosch (Amazon)
This detective drama series is based on the books by Michael Connelly. It comes to a conclusion with season seven.

Chilling Adventures of Sabrina (Netflix)
Based on the Archie comic book series of the same name, this supernatural series lasted for “four parts”, aka two seasons, and a total of 36 episodes before being cancelled.

Connecting… (NBC)
This remotely-filmed comedy series was dropped after four episodes with the remaining four episodes being released online.

Drunk History (Comedy Central)
This “educational” comedy series was renewed for a seventh and final season but production was halted on season seven due to the COVID-19 pandemic.

Evel (USA Network)
A limited series based on the life of stunt performer Evel Knievel, this show was set to star Milo Ventimiglia in the lead role. Due to production delays caused by the COVID-19 pandemic, the series order was cancelled.

F Is for Family (Netflix)
An adult animated family comedy, this show was renewed for a fifth and final season.

Filthy Rich (FOX)
A family drama about a family that runs a successful religious network, this series needed divine assistance. It was cancelled after five episodes had aired.

GLOW (Netflix)
The female wrestling series was initially renewed for a fourth season but that renewal was rescinded due to production delays and COVID-19.

I’m Sorry (truTV)
This sitcom was renewed for a third season but then, due to COVID-19 production delays, that order was rescinded and the show was cancelled.

Judge Judy (syndicated)
The 25th season of this popular simulated courtroom series is the end but, Judge Judy Sheindlin will star in a new series called Judy Justice.

Keeping Up with the Kardashians (E!)
A reality series that follows the Kardashian-Jenner blended family, this show is ending with season 20. But, will the family ever truly step out of the limelight?

Last Man Standing (FOX)
A family sitcom starring Tim Allen, this show first aired on ABC for six seasons before being cancelled. It was later revived on FOX for three more seasons. Season nine is the end.

The Lincoln Lawyer (CBS)
The network had given a series production commitment for this show but, a year later, in the midst of the pandemic, CBS decided not to move forward.

Lost in Space (Netflix)
The streaming service renewed this sci-fi reboot series for a third and final season.

Lucifer (Netflix)
The streaming service rescued this supernatural cop drama series and ordered a fourth season when it was cancelled by FOX. Netflix later renewed the show for a fifth and final season but then, ordered an additional “final” season.

neXt (FOX),
This thriller series was going to run over the summer months but was held for the fall schedule, due to the pandemic. It drew low ratings and was cancelled after three episodes.

On Becoming a God in Central Florida (Showtime)
Starring Kirsten Dunst, this dark comedy series was renewed for a second season but that renewal was cancelled due to COVID-19.

Ozark (Netflix)
Revolving around a married couple who moves to the Ozarks for money laundering, this drama wraps up with a fourth and final season.

The President Is Missing (Showtime)
The cable channel ordered a series based on the novel by Bill Clinton and James Patterson. Production was underway but then, due to the pandemic, the show was cancelled.

Sexy Beast (Paramount)
This TV series was envisioned as a prequel series to the 2000 dark comedy film of the same name. Unfortunately, due to COVID-19 and the ViacomCBS merger, plans for the series were cancelled.

Shameless (Showtime)
Revolving around the dysfunctional Gallagher family, this series’ story wraps up with the 11th  season.

The Society (Netflix)
A mystery drama, this show was renewed for a second season but that order was later rescinded due to COVID-19 delays.

The Spanish Princess (Starz)
A historical drama series, this show comes to a natural conclusion with season two.

Stumptown (ABC)
The network initially renewed this Cobie Smulders series for a second season but, due to COVID-19 delays, that renewal was cancelled.

Supergirl (The CW)
After six seasons, Kara of Krypton is hanging up her cape.

The Third Day (HBO)
A limited series starring Jude Law and Naomie Harris, this series concluded after six episodes and a special.

Tosh.0 (Comedy Central)
The cable channel renewed this series through season 16 (2024) but Comedy Central later decided to pivot away from making live-action comedy series. So, season 12 is the end for comic Daniel Tosh’s series.

Wife Swap (Paramount)
A reality series about two households switching wives/mothers for two weeks, this series originated on ABC (2004-10, 2013). It was then revived on Paramount for two additional seasons and subsequently cancelled.