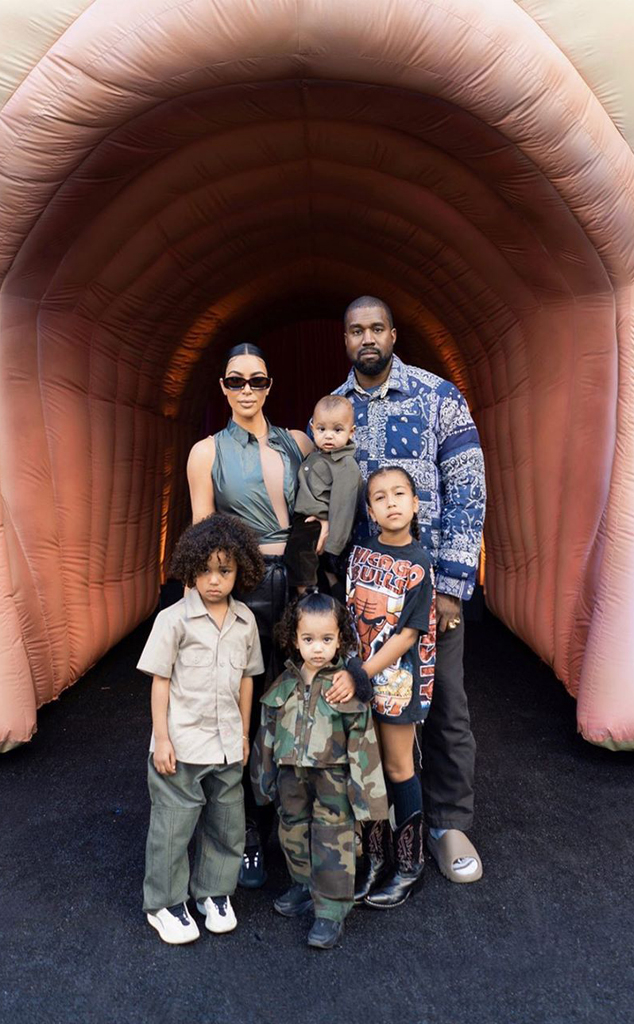 Turn that frown upside down!

On Wednesday, Kim Kardashian gave her 159 million followers another inside look at Stormi Webster‘s 2nd birthday party, which took place on February 2, with some adorable new pictures.

Posing in front of the Stormi World inflatable archway with Kanye West and their children North West, 6, Saint West, 4, Chicago West, 2, and Psalm West, 8 months, the family of six looked thrilled to ring in Stormi’s big day—well, most of them did. Amidst the smiles from his famous parents and siblings, Saint’s serious mug stands out in the sweet West family photo.

As the day progressed, things turned around for Sainty. Once inside the carnival-themed party that aunt Kylie Jenner and Travis Scott elaborately planned, the little tike enjoyed the various games, attractions and treats. An avid Trolls fan like his cousin Stormi, Saint was overjoyed to meet one of the characters from the animated film. Standing next to one of his buddies while snacking on a blue lollipop, the 4-year-old flashed the camera a big smile, which was also featured in Kim’s post.

Like her older brother, Chicago also had a blast at Stormi World. In the photos Kim shared from the epic celebration, her baby girl can be seen treating herself to some candy and ice cream as she joined in on the birthday fun. Even Kanye couldn’t contain his excitement. As he and Kim made their way into the party, cameras caught the “Follow God” rapper smiling as he soaked in the Stormi World decorations.

But, no one had as much fun as the birthday girl. Donning matching outfits with mom Kylie, Stormi was beyond pleased with her b-day party. In addition to meeting her favorite characters from Frozen 2 and Trolls, the girl of the hour got to spend some quality time with her family, including grandmother Kris Jenner and aunts Khloe Kardashian, Kourtney Kardashian and Kendall Jenner.

Stormi’s cousins Dream Kardashian and True Thompson were also on hand to celebrate her big day, as well as her famous pals Luna, 3, who attended Stormi World with her parents John Legend and Chrissy Teigen, and Cardi B and Offset‘s baby girl Kulture, 19 months.

Reflecting on the successful party, Kylie took to Instagram and wrote, “Such a blessing to be able to create these magical experiences for my baby. StormiWorld!!!! thank you God.”