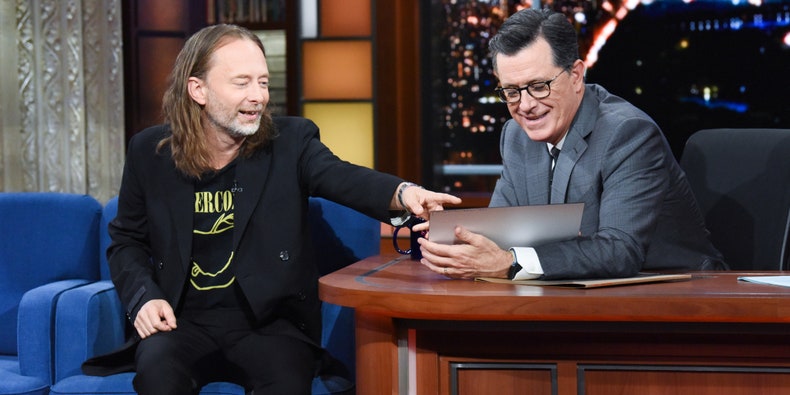 Thom Yorke was a guest on tonight’s episode of The Late Show with Stephen Colbert. The Radiohead frontman sat down for a wide-ranging chat with Colbert, which was edited for time on TV but shared on YouTube in full. Watch their entire conversation below.

Colbert began by reminiscing about the time Radiohead were given a special hourlong episode of The Colbert Report a few years ago. Colbert reminded Yorke that the fictional Report character of Stephen Colbert “did not know who you were” and also placed the band “in the Mountain Dew Chill Zone.” (It was actually the “Dr. Pepper Flavor Zone.”) They also talked about how, backstage earlier today, they discussed how Colbert’s sons are huge Radiohead fans.

The interview pivoted to Yorke and Radiohead’s history of writing political music. “How does it feel to be right,” Colbert asked, claiming their music predicted the current political moment. “I guess I wasn’t thinking about the future, I guess I was looking at what was happening at the time,” Yorke said. “It’s more overt now.” He continued, “When we wrote the album Hail to the Thief, that seemed pretty bad—that period of time when Bush Jr. got in. And now we’re here.”

Yorke mentioned that right-wing political turmoil has “spread to our country now, as well.” Following a discussion about Brexit and Boris Johnson, Colbert asked Yorke how he’d feel about being knighted. “I think I’ve blown that chance,” Yorke said. “When our current glorious leader got in, I put in an offensive enough message to, uh—yeah, I’ve got no chance now.”

Colbert told Yorke that Americans are excited to see “you guys messing up over there because we obviously have really screwed the pooch over here.” Yorke responded, “You have at least the chance to push him off the cliff—just him. We’re tied to these guys. They’re tying us up and they’re going to take us off the cliff with them, and as they do it, they’re saying they’re the will of the people. It’s kind of disturbing. We live in strange times.” After a beat, Yorke added, “It’s not my fault.”

The conversation turned to Yorke’s new album ANIMA and his collaboration with Paul Thomas Anderson. He discussed what little “animas” are, and when Colbert asked if his songs could be considered “animas”—“little spirits” or “dream-like states”—Yorke paused for a bit and said, “Nope, pass, next.” Colbert moved on: “I understand you keep a dream diary.” Yorke deadpanned, “Nope.” Colbert threw the note card away and rephrased the question, which led to a discussion of the importance of dreaming.

Read “5 Takeaways From Thom Yorke’s New Album, ANIMA” over on the Pitch.