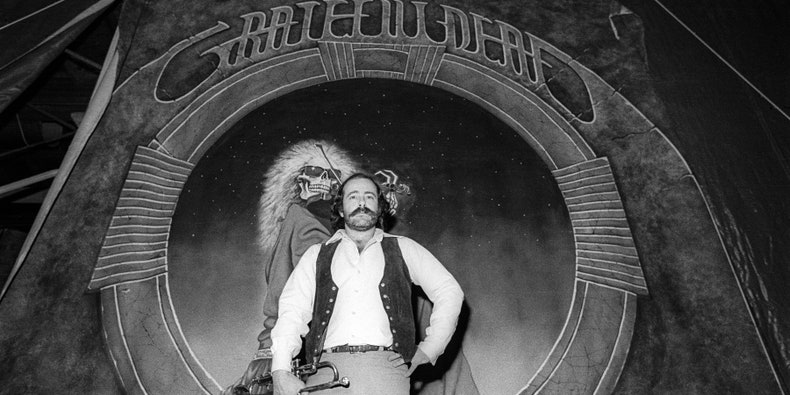 Robert Hunter, the songwriter behind many beloved Grateful Dead classics, has died Rolling Stone and The New York Times report. A cause of death has not been revealed. He was 78 years old. In a statement to RS and The Times, Robert Hunter’s family said:

It is with great sadness we confirm our beloved Robert passed away
yesterday night. He died peacefully at home in his bed, surrounded by
love. His wife Maureen was by his side holding his hand.

For his fans that have loved and supported him all these years, take
comfort in knowing that his words are all around us, and in that way
he is never truly gone. In this time of grief please celebrate him the
way you all know how, by being together and listening to the music.

Robert Hunter was born in California. In 1961, Hunter met future Grateful Dead frontman Jerry Garcia, and the two played together in various bluegrass groups before Hunter chose to pursue his writing. As a student at Stanford in the early ’60s, Hunter was a volunteer test subject in CIA-sponsored MK-Ultra LSD, psilocybin, and mescaline experiments alongside writers Ken Kesey and Allen Ginsberg.

After leaving Stanford, Hunter headed to the Southwest where he struggled with drug addition. During that time, he sent some songs he wrote to Garcia, who then invited him to become the Grateful Dead’s lyricist. Hunter joined the band in 1967, when he began writing the lyrics to “Dark Star” at a rehearsal.

Over the years, Hunter penned the words to Dead classics like “Ripple,” “Box of Rain,” “Scarlet Begonias,” “Dark Star,” and “Touch of Grey.” His lyrical contributions to the Dead were often considered the group’s soul. When the Grateful Dead were inducted into the Rock and Roll Hall of Fame in 1994, Hunter was included, the only non-performer ever honored as a band member. Later, in 2015, Hunter was inducted into the Songwriters Hall of Fame.

Beyond writing for the Dead, Hunter released several solo records and poetry volumes. He also held a notable creative partnership with Bob Dylan, co-writing songs on 1988’s Down in the Groove, 2009’s Together Through Life, and 2012’s Tempest. In addition, Hunter wrote songs for Elvis Costello, Jim Lauderdale, and Bruce Hornsby, including “Take You There (Misty)” off this year’s Absolute Zero.